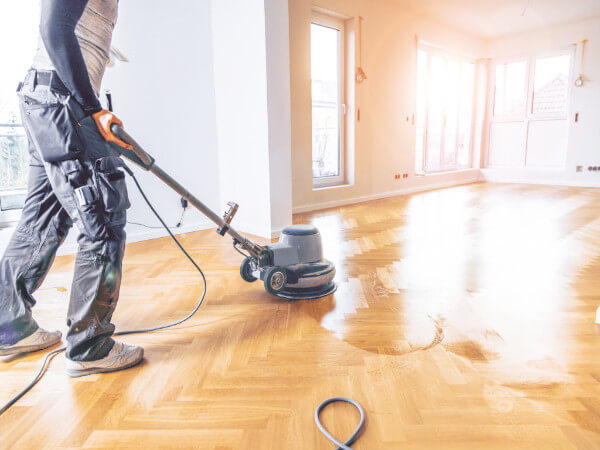 “When installing an engineered wood floor in a basement, what is the most unique obstacle you have ever had to incorporate in your installation?”

“There are a lot of remodels in our area. Many times in older homes, the basement wasn’t necessarily designed to have wood floors in it. Some basements have built-in drains and they’re sloped because they kind of expect the water to come into the basement and flow downward toward the drain and back out of the house. So, the issues we will have there are with leveling and moisture mitigation. In those instances, we will work with a self-leveler and concrete sealer to seal off and actually have them change landscaping so water drains away from the house instead of back into the basement.”

“We were installing a below-grade floor, which would be considered a basement in some parts of the country. Once we tore up all of the tile, there were cracks in the slab and there was actual water coming up through those cracks. This house was on a hill and come to find out, the water runoff was from the hill and there was no moisture barrier underneath the slab. A third-party contractor had to come in and demo the slab, reinstall a moisture barrier, and then pour a new slab. I ended up doing a moisture barrier on top of that after the slab had cured months later and then we continued the install.”

“We didn’t do very many basement installs in Colorado. The most unique obstacle I had to work with was when asked to install wood flooring in a humidor. The customer was a cigar aficionado, and was building a new humidor. The challenge was getting a flooring product that was appropriate for the high RH levels required for a humidor. After some discussions with the customer, I learned the RH would be kept at a consistent 70 percent. The good news was that it would be consistent. The bad news was that it was 70 percent RH, which translates to a moisture content of the wood being about 13 percent. No engineered wood floor I could find at the time was designed for these conditions. We both decided to get a flooring product that he wanted, and then condition it in the humidor for several weeks to get the wood to the correct moisture content. After it had reached equilibrium, we then were challenged with flooring that had swelled up and wouldn’t install. We were forced to reroute the grooves and modify some of the boards to get it in, and looking good.”

Did you miss our previous article…
https://www.reclaimedhardwoodflooring.info/?p=774