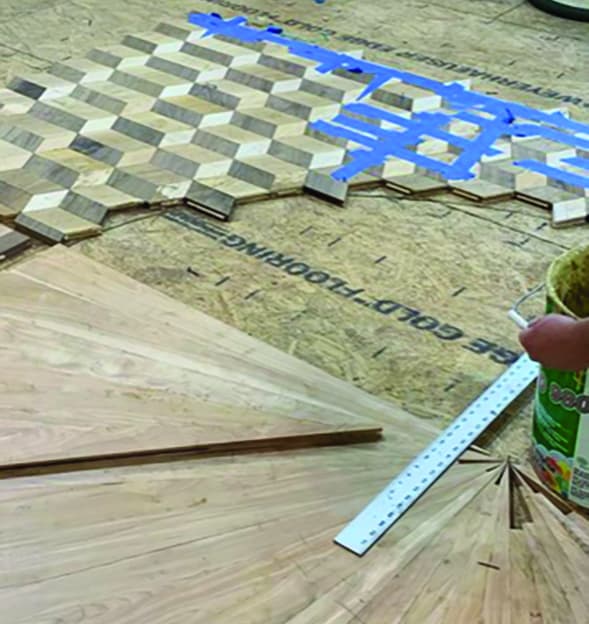 Attendees of NWFA’s Advanced Installation courses are familiar with the fantastic floor panels that often come together due to their in-class collaborative efforts. While finished panels from the classes may be discarded or recycled, one unique floor found a second life in a local commercial storefront.

“I’ve been a part of NWFA Advanced Installation courses in the past, and it was such a fun and educational experience for me as a contractor,” explains Jason Duron of JD’s Flooring in St. Louis, Missouri. “To have so many artistic professionals gather from all over the country and turn a blank canvas into a work of art is something that is impossible to replicate elsewhere.”

Recently, Duron arranged for two of his employees to attend an NWFA Advanced Installation course to have the same experience.

“They were blown away by not only the information they learned, but by an intricate floor panel they were a part of creating. Each day, they excitedly sent me pictures of their progress. To them, what started as making puzzle pieces ended up being the most stunning floor they had ever had a part in,” says Duron. “Pictures don’t do the floor justice as far as the scale and the intricate work that went into that panel.” 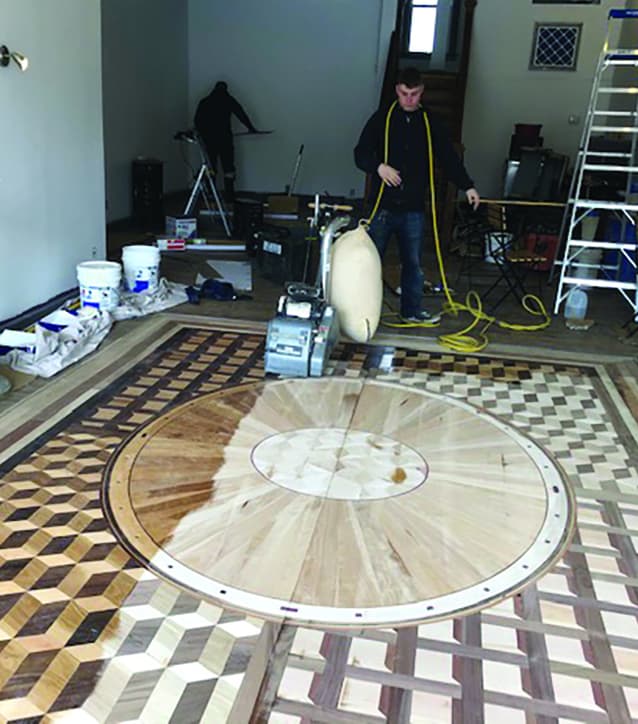 “Not long after the class was finished, I was approached by a commercial client who owns several storefronts on the Delmar Loop in St. Louis. She knows the type of work that we do with wood floors, and offered her buildings as places for students to practice,” explains Duron. “I spoke with Brett Miller at the NWFA about the possibility, and the discussion led to Brett offering up the panel my students had a part in creating.” 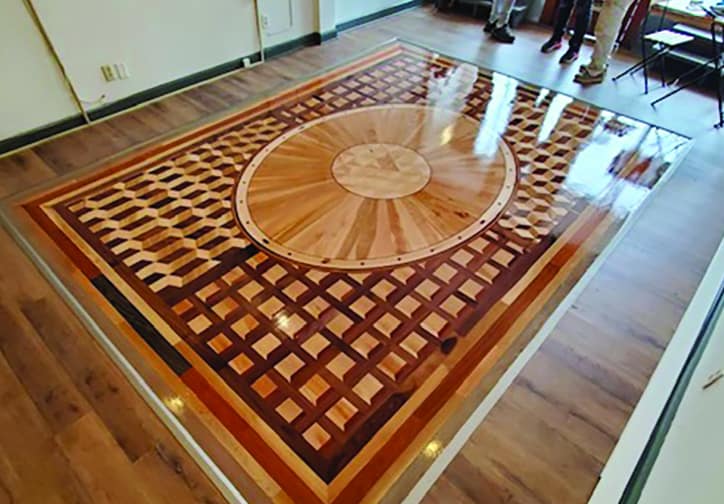 “The entire process was very satisfying to be a part of, but to me, the most amazing thing is the number of hands that touched this floor. From the people in the NWFA class who created it to the people who helped transfer and install it,” explains Jason Duron of JD’s Flooring in St. Louis.

Duron accepted Miller’s offer and then worked out a plan to transport the panel from NWFA’s training facility to the storefront, where he would then install it.

“Using a flatbed truck and slowly and carefully driving on backroads, we were able to drive the panel to the location. Unfortunately, it would not fit through either the front or back door of the business, which necessitated us cutting it in half,” says Duron. “We found the most center joint that we could and followed it down. We cut it in half directly on the trailer using a cordless Makita saw.”

It took nine people to get the panel into the building due to its 18-foot length and immense weight, as it was not simply the visible wood flooring they were lifting, but also the attached subfloor. Once Duron and his team were able to get the panel inside, the next step was to carefully square the panel up, and make sure they allowed enough space for the floor to sit flush with the floor around it. This was critical because he knew that once they set the panel down flat, it would be very difficult to get back up if they needed to do so. 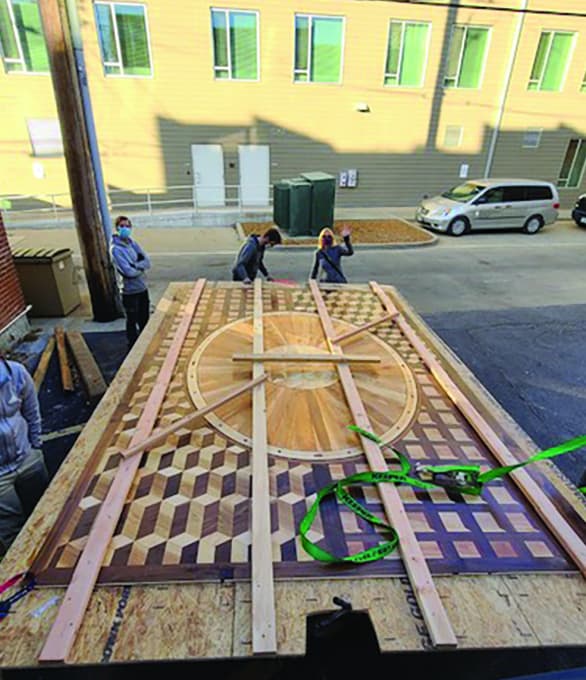 “We had cut out a section in the existing 100-year-old fir floor that was already at the location. We also had to cut five additional, even older layers of material that were underneath it. We set our saw blade at about two inches deep to make the cuts that we needed to,” explains Duron. “We then dropped the floor in, and created a border around it to blend it with the existing floor.”

The border was a mix of Brazilian cherry, white oak, and red oak. Then a transition piece was added to finish it off.

“The building currently is being used as a pop-up art gallery, but it has seen use as a hair salon, shoe store, and even a hot dog stand,” says Duron.

Duron says his team then resanded the floor, sealed it with Universal sealer as a base coat to get the enhanced color, and used Bona water-based finishes over the top.

“The entire process was very satisfying to be a part of, but to me, the most amazing thing is the number of hands that touched this floor. From the people in the NWFA class who created it to the people who helped transfer and install it,” explains Duron. “I think the floor should sit in what is now an art gallery, as it’s a piece of art that truly deserves
to be showcased.”

Duron says he has gotten many positive comments about the floor and inquiries about hardwood flooring in general since it was installed.

“It’s a great conversation starter with young people about what is possible with hardwood, but just as important, about careers in the industry,” says Duron. “The fact that it brings life and beauty into a commercial space is just a bonus.”

Did you miss our previous article…
https://www.reclaimedhardwoodflooring.info/?p=1309