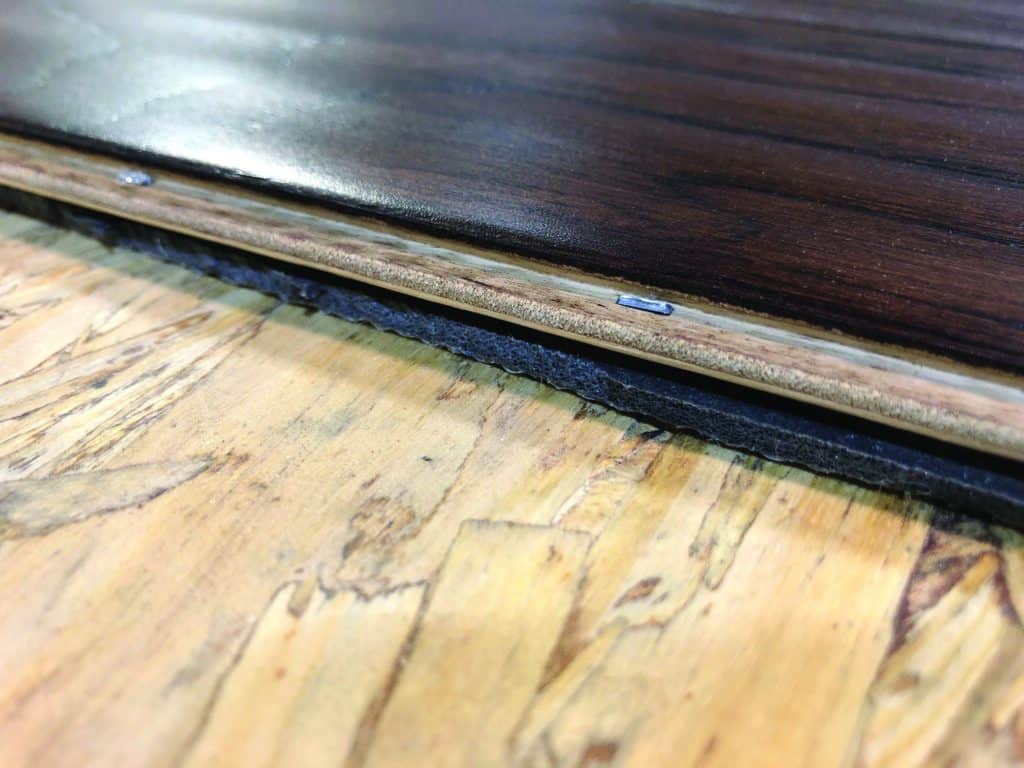 I was called out to inspect a recently installed floor. The homeowners claimed the floor was making snapping and popping sounds when walked on. When I entered the home, I noticed that the home was well-maintained, and the floors looked clean and well-kept.

The floor was a 5” wide by ½” thick engineered product mechanically fastened to an OSB subfloor. The floors were installed on the main and upper levels over a finished basement. While walking normally across the floor, popping and crackling noises could be heard throughout the main and upper floors, but not with every step.

When I spoke with the homeowners, they explained that, prior to installation, they expressed concerns to the installers about impact noise from above and discussed ways that they could minimize the amount of noise. After conferring with the installers, it was decided that they would install a sound dampening underlayment between the subfloor and the flooring. The homeowners vacated the premises while the floors were being installed. When they came back after the floor and baseboards were installed, they noticed the popping and crackling noises. The installers told them that the flooring was just “settling in” and that the noises would go away in a few weeks. The homeowners stated that, “If anything, the floors are making more noise now than after they were just installed.” They tried to get the installers back to look at the floors, but they stopped communicating with the homeowners.

When I spoke with the installers, they explained that they stapled the floor down using 1 ¼” inch crown staples, and they don’t usually put a sound dampening underlayment under a staple down application unless the homeowners want them to; usually using 15# felt. They also stated that the environmental conditions during installation were ideal. The subfloor did not make any noises when it was walked over and the job ran smoothly without any issues. They agreed that they did hear some crackling noises during installation, but no more than usual.

Useful tip from an inspector:

When I began testing the floor, my first observation was that crackling noises could be heard while walking over the floor, but not with every step. In addition, walking back over that same area did not consistently produce the crackling noises. In the places where I could produce the noises repeatedly, I took a closer look and detected independent movement from board to board. There were also some areas where I could press down hard with my thumb and make both the groove side and the nailed side of the board move. In regards to the nailing schedule, the staples were spaced 4” to 7” apart and within 2” of the ends. The floor flatness was within tolerance. The environmental conditions
were ideal (the same as during installation) and there were no signs of cupping or gapping.

The flooring manufacturer’s installation instructions clearly stated that sound dampening underlayments were only to be used in a floating floor installation. They also specified the use of 1 ¼” 18-gauge barbed cleats be used for mechanically fastening this product.

The homeowners originally thought the issue they had with the flooring was a manufacturing-related issue. As it turned out, the failure to follow specific installation instructions meant that the manufacturer was not responsible for the issue and, therefore, not obligated to help remedy the situation.

Installers often are faced with unusual requests, and sometimes, what the homeowner wants is not achievable. It’s important to communicate with the homeowners and set reasonable expectations prior to installation in order to avoid an issue that may be viewed as the installer’s fault. If the homeowner was aware that the manufacturer would nullify their warranties as a result of installing the floor in this manner, they likely would not have asked the installer to do this.

Adding an acoustical mat under a floor that is mechanically fastened has no effect in reducing impact noise as the vibration caused by footfall still will travel through the fasteners into the subfloor. So, in this case, the installation of a sound dampening underlayment did not solve the issue the homeowners were concerned with prior to installation and, in turn, caused a separate issue. An issue of this nature easily is avoidable if the installation instructions are reviewed prior to installation.

Kjell Nymark is the manager of certification and training for the NWFA in St. Louis, Missouri. He can be reached at [email protected]